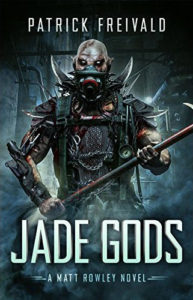 Jade Gods, by Patrick Freivald, is the third book in the Adventures of Matt Rowley, a former agent for the International Center for Augmented Phenomena (ICAP) and possibly our last chance for survival in the face of the coming cataclysm.

Jade Gods is a book of straight-up Lovecraftian end-of-the-world no-holds-barred cosmic horror, adapted for the 21st century. From the opening pages, Patrick Freivald brings the world to the brink of collapse and introduces the long-term effects of the alien invasion which has been taking place since the first book in the series. While this book is much more grim than usual for the author, it is definitely a treat for horror fans who are tired of slow buildups in their cosmic horror and just want to see the world turned into screaming still life ASAP.

For all its strong points, however, Jade Gods does tend to put the ante up too high, almost to the point where Rowley’s clash with ultimate evil seems to be too one-sided and the endgame seems to be anticlimactic, especially with the stakes being as high as they are from the get-go.