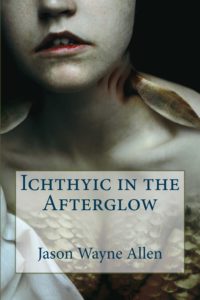 Icthyic In The Afterglow, by Jason Wayne Allen is a horror novella about a world where the Lovecraftian Old Ones reign supreme and Ultharian extremists wage a protracted war of attrition against their canine counterparts.

An important note, before you continue this review: Icthyic is a very irreverent book, especially when it comes to its personal (if well researched) reiteration of the King in Yellow and other stories that fall into the wider Mythos. If you are a genre purist, then perhaps this book will not be up your alley. The book is also not recommended to the faint of the heart or the easily offended.

Unabashedly grim, utterly bloody and occasionally blasphemous, Icthyic in the afterglow could easily be described as a primarily splatterpunk horror novella with a touch of cosmic horror thrown in for good measure. At 70 pages, it’s crammed to the brim with disturbing imagery and enough gore to make a Japanese grindhouse director reconsider his priorities. It’s also pretty damn funny, at times.

Icthyic, however, suffers from certain narrative setbacks: the pacing is choppy at times and the book’s narration seems to be switching gears for no apparent reason. A lot of the characters only seem to serve as setpieces in one scene, only to be brutally killed off in the next and the ending to the book was so sudden, it gave me a case of the tonal whiplash.

That does not mean however that the book in itself is not entertaining. Being a fan of the good old schlock horror genre, I savored the occasional outbursts of ultraviolence throughout the book, while occasionally pausing in my reading to look up some obscure reference that the author had integrated into the narrative.

The cover artwork is very well made but unfortunately clashes with the story’s overall tone and theme. While it invokes the sense of psychological horror, it does nothing to pump you up for the carnage that floods in from the second page onward.