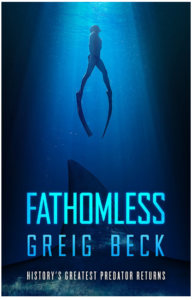 A thriller at heart, Fathomless spans across half a century, detailing the story of a science crew that stumbles into the Megalodon, the legendary grandfather of today’s great whites. The author manages to insert his love for the sea and its underwater marvels without allowing the science of it all to become too overbearing, which is certainly his strongest suit inside the novel. What’s more impressive is that somehow, Greig Beck has managed to incorporate these elements into a thriller with a very much believable premise and to pace it out marvelously throughout the book.

Perhaps Fathomless’ weakest point is its supporting cast of characters and especially its villains, who do not hold up to scrutiny on closer inspection. However, seeing how it almost took me a second read-through to notice, I can certainly say that the author has managed to conceal the fact with finesse.

Fathomless is published by Cohesion Press