Located at the ends of the Earth, Antarctica has always had this special allure for the intrepid explorer. A vast, foreboding and desolate continent with a harsh and unforgiving climate, this place has captured the imagination of many an adventurer. None more so than H.P. Lovecraft when he created the epic that is “At the Mountains of Madness”. This recounting of an ill fated Miskatonic University expedition to the South Pole and its tense and scary encounter with forces far, far beyond the realms of human understanding blew me away when I first read it. Lost civilizations, ancient aliens, hints of bioengineering and dormant horrors in the wilds of Antarctica made for a wonderfully evocative and enthralling story.

Sitting in front of me is Beyond the Mountains of Madness, an anthology of fourteen short stories inspired by the icy and alien wastes of Antarctica and its ancient slumbering horrors. Published by Celaeno Press, this anthology appears to have had a somewhat troubled gestation. Initially this was announced by another publisher a few years back as The Mountains of Madness and when I saw that Robert M. Price was editing it and who appeared on the table of contents, I knew I just had to have it. I watched out for it on Amazon and the publisher’s website to see when it was due for publication and then found myself waiting as the months rolled into years without a hint of if this actually existing or not. Then, very briefly, it appeared on Amazon and just as quickly vanished. I’m not entirely sure what happened but here we are in 2015 with a revised and expanded book. The real question though is “is it any good?” Well, overall it would be a strong “yes”. Okay, some stories didn’t quite work for me but this is by and large, a pretty good anthology with entertaining interpretations and extrapolations of what happened after the Miskatonic expedition’s discoveries.

Anyway, onto the stories and the first is Glynn Owen Barrass’ “The City at the Two Magnetic Poles”. This envisages a world where Wilbur Whateley wasn’t killed at Miskatonic University and purloined the Necronomicon to unlock the gate to man’s eradication. Fortunately, his plans haven’t completely come to fruition and humanity has a limited window of opportunity in which to foil his machinations. This is a great little opener to the anthology. Barrass builds up the pace and tense atmosphere as the rapidly dwindling band of humans pursues Wilbur across the ice and snow of Antarctica before he can finally wipe the Earth’s surface clean.

The second story in, “The Second Wave of Fear” by Joseph S.Pulver Snr. is just breathtaking in its execution and construction. Pulver has imbued this story of the birth of Shoggoth consciousness and the subsequent war with The Elder things with a fragmentary and evocative style of writing. The clipped and short sentences of the Chss (Shoggoth) reflect their relative primitive state of mind and it nicely contrasts with the detailed, ordered and precise collective thoughts of the Tekeli-Li (Elder Things). This gives it a discordant and jarring flow to the narrative but it is a highly stylized form of writing but in the context of this story it really does the job and ably demonstrates why all the superlatives about Pulver’s writing ring true. Excellent stuff!

Next up is Pierre Comtois “Second Death”.  I have to admit when this book was first announced he was a bit of an unknown to me. In the intervening years however I have read more of his work and he is a solid and entertaining writer. This story features occult detective Anton Zarnak as he is called to a local asylum to deal with an inmate by the name of Danforth who has woken from a mysterious coma. Any Anton Zarnak story is a real treat. And this is no exception.

“Beneath the Mountains of Madness” by Peter Rawlik is told from the perspective of a solitary survivor from the initial expedition. This is another excellent take on aspects of the original novella specifically the idea that The Elder Things are the progenitors of life. I really liked the way in which Rawlik reveals the wondrous and terrifying nature of both the underworld and of the Elder Things manipulations of reality.  From the very off you have this gnawing sense that all is not as it appears and the reveal at the end shows just how insignificant humans and their sense of achievement actually is in the cosmos.

Ken Asamatsu is a relative unknown for me.  In his tale “The Continent of Madness”, translated by Edward Lipsett, the Nazis attempt to unlock the hidden secrets of the continent using a mysterious mask. It is solid and entertaining but I think by this point I was starting to get a bit fatigued of reading this type of book but there was enough there to make me want to read more of his work.

“Gedney” by Laurence J Cornford  is told from the perspective of a modern day researcher  doing investigative work around the original expedition and his growing sense of unease about the reappearance of the titular character in 1934, three years after being pronounced missing from the 1931 expedition. I liked the slow build up of tension as the researcher begins to transition in his perceptions about the authenticity of the account and the repercussions that this will have for humanity. It is a great little story. 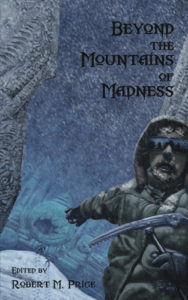 The same unfortunately cannot be said for C.J. Henderson’s “The Pleasure in Madness”. I don’t think this is quite representative of how good a writer he actually was. Henderson wrote a huge amount of fiction, particularly with occult detectives and this one features Piers Knight who comes across as almost an Indiana Jones type figure of the occult. In this he gains access to a secret government base at the ends of the earth which goes pear shaped very quickly. It just didn’t really hang together for me in terms of plot and felt very convoluted. A crying shame as C.J. Henderson was an excellent writer and story teller. Maybe I was just suffering a bit of “Madness” overload when reading it. I’m sure others will think differently.

Brian M. Sammons’ contribution is “A Biting Cold” is about a short, sharp and exciting foray into a seemingly deserted research station by a naval rescue team. I really liked the pacing and surprises that face the team as they try to discover why the base has gone silent. It is just a damn good story. Much can be said of Cody Goodfellow’s “Garden of the Gods”. Set in the depths of South America, a mining operation has uncovered something that is awake, aware and highly unimpressed with its legacy of creation. Wheels are set in motion to contain this situation but what seems straightforward rapidly degenerates into an ancient game of chess between far superior species. It is a taut and exciting story that delivers on its’ initial premise through to the end.

The same compliment can be applied to “The Danforth Project” by Stephen Mark Rainey about why we cannot see actually see The Mountains of Madness in all their glory.  I really liked this story and its’ take on what the Elder City actually is. It is good stuff. “Tekeli-Li” by Edward Morris was one of the few stories in here which left me a bit bemused  I think probably because it was done in the style of a TV script it just threw me  and whilst substantially different from other stories it just didn’t quite click with  me.

“Static” by Will Murray is another cracking story about The Elder Things technology and the real terror lurking beneath the ice and snow. It also reinforces the idea that you really shouldn’t go poking around with things you don’t understand.  A sentiment that is also echoed in William Meikle’s excellent “Into the Black” as a research team’s drilling beneath the ice unearths that which should have remained untouched. It is a really good story and nicely leads into the exceptional closer, “In Admunsen’s Tent”. Written by John Martin Leahy, this is a stone cold classic tale of nameless and formless terror in the Antarctic.  The story, one of only four Leahy published in his lifetime is a fittingly tense and chilling climax to the anthology.

Celaeno Press should be congratulated for getting this anthology out from what would have been permanent hibernation. This is Celaeno Press’ second publication following on from In the Court of the Yellow King and is, to be honest, pretty damn good. It may have limited appeal due to its very specific content but if, like me, you enjoy spending time in the company of quality storytellers then this is as good as any a place to start.