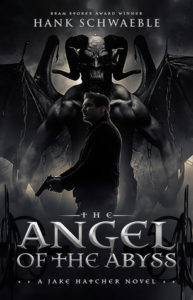 Angel of the Abyss, by Hank Schwaeble is the third book in the series starring hard-boiled occult trouble-magnet Jake Hatcher, as he fights his way inti trouble and then turns to run the heck away from it, Vin Diesel-style.

Hank Schwaeble’s horror work has mostly been focused on the realm of short stories. His previous collections focused on the idea of weaving little corners of nightmare worlds and giving the reader just a hint of the awful thing behind the curtain before pulling back. While Hatcher’s books don’t share that same subtlety (mostly due to their sheer length than anything) the author manages to balance out the break-neck action of a hardboiled occult investigator with the horror and weirdness inherent to the genre.

Of course, Angel Of The Abyss is more of a thriller than a horror book and as a result, it suffers from a sort of ‘streamlining’ effect, where a lot of the inherent mystery in the setting has to be torn down to make room for the action. While this might not give the book the visceral punch in the author’s previous works, you will certainly have trouble putting it down.

The cover art, done by Dean Sammed, is stellar as usual and makes a good point for anyone considering buying an actual hardcopy of the book.

Angel of the Abyss is published by Cohesion Press